You have to travel to Washington, D.C., to see the National Gallery of Art. But it’s only a skip up the turnpike to The Guild of American Papercutters National Museum, which opened last fall in Somerset.

Who knew that the art form was sufficiently widespread to merit a museum of its own? And that rural Pennsylvania would have the pull to be selected as its site?

The establishment of this new regional cultural venue was the result of a happy conjunction of events and personalities.

If you equate papercutting with silhouettes, or vignettes intricately cut from black paper mounted on a white background, you’re on the right track. But that’s only part of the picture.

The craft of paper cutting is centuries old, according to museum literature, and it has been practiced by nearly every culture. German and Swiss immigrants, many of whom settled in Eastern and central Pennsylvania, called it Scherenschnitte or scissors cutting. In Poland it was known as Wycinanki, and layered colored papers were used. European and Middle Eastern Jews made decorative paper art for the eastern walls of homes and synagogues as early as the 17th century. The art form is believed to have originated in fifth-century China.

Papercutters were among many artisans who, beginning in the 1960s, pushed their craft beyond traditional formats into the realm of fine art. Like potting, glassblowing and quilting, papercutting experienced a rebirth as practitioners began to infuse their works with individualistic expression and current subject matter, and to explore material.

The Guild of American Papercutters was formed in 1988 at the Hershey Museum of American Life in Hershey to support members in their artistic endeavors and to promote papercutting. The approximately 350 members reside in almost every state and in Canada, Mexico, Europe, Asia and Australia, and include artists, collectors and scholars.

When GAP decided to found a museum in which to house archives and a collection, several venues offered office and storage room but no exhibition space. Persons wishing to see papercutting art would have to do so by appointment.

That was problematic, said Kathy Trexel Reed, GAP member and museum vice president, because the group wanted examples of the art to always be available to visitors. She and Linda Harrill Peck, museum committee and GAP member, both live in Somerset County and are the resident GAP presence.

Ms. Reed is also a board member of Laurel Arts, headquartered at The Phillip Dressler Center for the Arts in Somerset. When the organization moved its dance center and classrooms to Georgian Place, room at the center became available. Ms. Reed talked with Laurel Arts executive director Michael Knecht, and the National Museum was established in cooperation with Laurel Arts, opening in 2009. Its mission is to collect and preserve, and also educate the public and exhibit outstanding examples of the art of papercutting.

It hasn’t been resting in obscurity.

Mr. Knecht estimates the museum has had 20,000 visitors since November. And a Japanese television crew is expected to arrive any day to film it.

The museum’s permanent collection currently comprises about 20 works, with potential additions being reviewed by a committee.

An inaugural exhibition in November 2009 featured work by charter members. “Present and Past GAP Board Members,” the second and current exhibition, includes more than 30 works that represent the range of styles, historical as well as contemporary, that members work in.

GAP president Marie-Helene Grabman exemplifies the “Swiss style” in her impeccable “Pennsylvania Memories,” Ms. Reed said. A centuries-old typically black-and-white form established by Swiss masters, it features an intricate border, miniature tableaus, and a medallion in the middle — sometimes a heart — where all of the parts meet. Ms. Reed pointed out sections of the piece that were made when the paper was folded, resulting in mirror images, and interspersed differing scenes cut separately.

A tour de force is the “Traushein — Marriage Certificate” by Mary Lou “Sukey” Meyer Harris, one of the original board members who was born into a German-speaking Pennsylvania Dutch family and lives near Hershey. Birds, tulips, a mermaid, a sea horse, a young winged couple and words are all cut from one piece Ms. Reed said. “Like a web, not a collage.” Decorative elements on the frame were cut with tin shears, then painted, glued and varnished on.

Works may be as deceptively simple as “Dulcifly” by Dorothy Buchanan, a Pittsburgher and dulcimer player who has incorporated two instruments into the insect’s body. “A Gift of Nature” by Joyce Yarbrough is an exquisitely rendered single black feather.

“There are no hard rules,” Ms. Reed said.

Artists develop signature styles. C. Angela Mohr specializes is “swirley things,” like chimney smoke or the steam rising from a cup of tea or, here, fumes from “Potion Bottles.” Karen Shain Schloss is a specialist in calligraphy, Ms. Reed said, as her painstakingly cut “Psalm 19” attests. Steven Woodbury carries scissors and paper when he travels and clips plein air, as in the small (3- by 11/2-inch) but readily identifiable “Crusaders Fort in Kusadas Harbor, Turkey.”

Ms. Reed’s own “First Garden” is a warm and playful depiction of Eden, including a frog, a grasshopper, a lamb and an ox accompanying the first couple, a mix of traditional style and contemporary interpretation.

The present museum is tiny — one exhibition room with additional space for collection and archive storage. But such ventures typically start small. The Rocky Mountain Quilt Museum, origin of an exhibition at the Westmoreland Museum of American Art, began with one room and 100 donated quilts in 1990. Now in larger quarters, the collection has grown to 700 quilts and the museum includes a gift shop and 3,000-volume library.

The papercutters museum combined with the National Museum of the American Coverlet in Bedford County and the Westmoreland will draw visitors and scholars of Americana from a national and international pool. It’s an appropriate resource to develop in one of the 13 original colonies.

The museum is also another step toward reaching a goal of Ms. Reed’s. Members’ work continues at times to be rejected from juried exhibitions under the assumption that it’s made from a pattern. 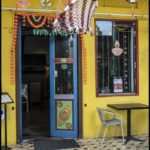 Check out the new features in our redesigned website, including Member Areas where you can send a note to other papercutting artists in the Guild, access First Cut archives, and more!

Jiangmei Wu,  an assistant professor of design in the Ezkenazi School of Art, Architecture, and Design at Indiana University at Bloomington, recently explains how she is using the art of origami in the COVID-19 fight.

Read the story, get the stickers!

A Home for Paper Artists

Through its publications, traveling exhibits, papercutting conferences, workshops, and demonstrations, members of the Guild of American Papercutters (GAP) seek to spread and celebrate the art of cutting paper. Whether you actively design and cut in paper, or simply appreciate the finished works of papercutters, we invite you to join our community. Our worldwide membership embraces all styles, materials, cutting methods, and experience levels. However you work, whatever your style, you will find kindred artists in the Guild of American Papercutters.